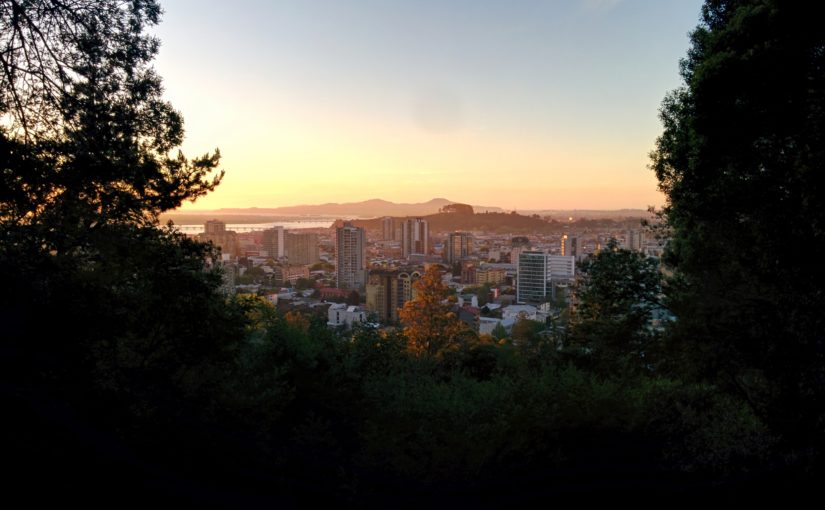 It was more than 100 days ago that I arrived in Concepción after driving 18,000km through the American continents. And it feels like yesterday I had still woken up in New York. It also has been more than 3 months since my last blog posting – it is about time to change that! In fact, I haven’t even written a single posting here in Concepción so let’s begin with…

My alarm rang at 2:30 am and I left the apartment in the center of Santiago about 30min later, getting on my car for one last time heading south. When I spilled coffee on my pants while driving, I knew it had been a good idea to not yet wear my working clothes. The closer I got, the more excited I was. Finally I arrived to Concepción, I took the last turn of this 6 weeks long journey and eventually spotted the “tower” at the top of the hill. Indescribable feeling! I parked hidden behind a tree, changed my clothes and brushed my teeth. Just enough time left to take a selfie together with my car Henry in front of my new workplace at Casa Cien.

The (work-)day started off with a welcoming meeting in which all current projects were explained and discussed, I was introduced into the team and into the habits of the office. I knew immediately that I would feel very at home at this place. Now, 100 days later I can confirm that I was right.

To build a model, materials had to be bought from the local store. I suggested going with my own car, so a colleague and I went. It was a 5min drive. On the way back my cars breaks suddenly stopped working for one moment. Then they continued working, but the car’s front axle would constantly block. Turning and/ or breaking became a nightmare. Hazard lights on, in snail speed and without turning we went to a residential area where I could leave the car at the side of the road. I still cannot believe this: 18,000km went fine and as soon as I arrive my car gives up. If destiny exists, then it for sure wanted me to arrive safely.

Back to the office, I learned that part of the tasks was to walk the office’s dogs. Amazing! I love dogs, having them in the office is a great experience and of course I walk them without any hesitation. After that, the question popped up where I would stay. I hadn’t researched anything in advance and planned to stay in a hostel for the first days. But that wasn’t necessary. Another colleague lived in a student’s housing. There were still rooms available, so I gave the owner a call and had a place to stay for the next days. That went smooth.

Those were all the events of the first day. After work I visited my car and had to drag my luggage by foot to my new place. It was a new building with big rooms, clean bathrooms and a community room & kitchen on the top floor.

The next days I had to learn that winter/ spring in Chile actually means winter/ spring. Of course I knew that seasons are inverted on the southern hemisphere; I still hoped it would be nicer in general. But weather was pretty much like in April in Germany. One day it could be sunny and warm and the next it could be cloudy and cold. Luckily in the meantime summer has fully arrived and now my colleagues and I are enjoying sunny days on nearby beaches. (But the Pacific Ocean is just too cold!)

In the first days I did consider staying in the student’s housing. The only downside was the very small kitchen and maybe the location. But when another new colleague found a chic 1 bedroom apartment in a new highrise building and payed almost the same rent like I did, I knew mine was overpriced. So I decided to move. Since November 1st I lived in a house shared by 16 students. It is a bit less nice (clean & spacious) than the student’s housing, but perfectly located and I pay half.

The next weeks were characterized by enjoying life in Chile as a group of gringos, getting to know about Concepción and doing a lot of day- and weekend-trips.

My first longer weekend I spent together with a colleague in Santiago, checking out some museums and doing the casual touristy stuff.

One weekend we rented a car (I hadn’t fixed mine yet) and went to location, where Smiljan Radic built the VIK vinery. We had a tour, an amazing wine tasting and a delicious lunch. Afterwards we continued visiting remarkable Chilean architecture. We spent the night in a cabin in the middle of nowhere.

One Sunday we spontaneously went to Lota, a small town with a cute market in the center. We tried nalca (a vegetable – spoiler: not good, not good at all) and visited an old coal mine. We walked on the beach and we were denied alcohol because it was election day.

Another weekend we went to Santiago again, checked out the architecture university, went up and down the Cerro San Cristóbal and visited the Bahai temple.

When another three day weekend came around we rented a car again and went to Pucón and from there to the Thermás Geometricas. It was a great and relaxing summer & spa weekend.

The Christmas days I spent together with one colleague at Casa Poli – one of our office’s projects. It is a house that usually is given to artist to work there, but it was free over Christmas. It’s a spatially impressive building gorgeously located on a cliff right at the Pacific Ocean.

The first two January weekends we spent on different beaches and lakes. The summer-feeling is in full effect!

Last weekend I had the opportunity to house-sit Poli once again where I finally took the time to keep up with my blog and also finally start working on applications for the next stop of this Walz. 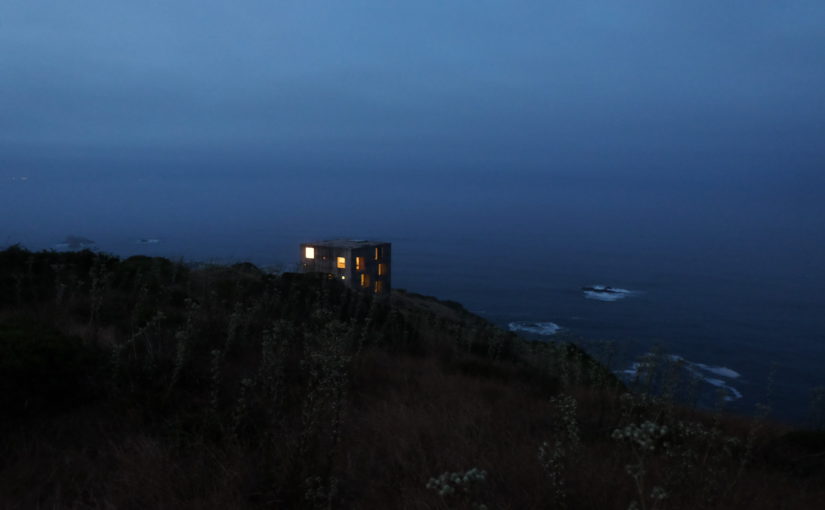 Here at Pezo von Ellrichshausen, it is tradition to have a dinner to welcome or farewell a team member. Finally my day has come. I am just returning home from my very own farewell dinner, which opened my last week of work in Chile this Monday. This intense six month period of creation of architecture, which is now coming to a closure, will surely influence me in the future. I had time to be creative, to read, to think about many things and I was gifted a new branch to my family – my coworkers here. In my heart, I will carry all this with me back home.